“Comedian” Rob Delaney took a break from posting pictures of dog feces and interacting with misogynist fans to bash Israeli Prime Minister Netanyahu during his United Nations address today. Get it? He’s cuckoo. And meany pants or something. See, he doesn’t care about Israel or its citizens because he’s trying to protect them from people who want to wipe them off the face of the map.

Yuk, yuk, yuk. To the deranged Left, Netanyahu is the bad guy. Unreal. 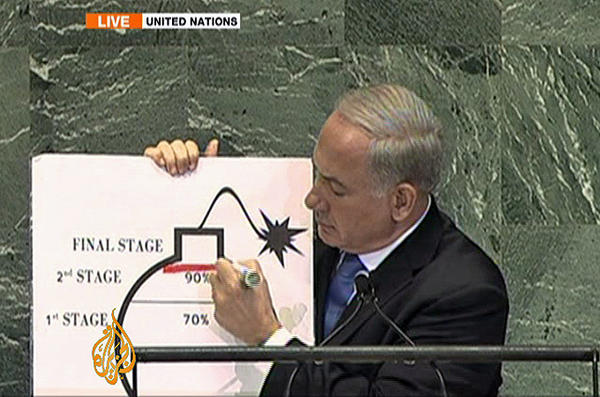 His equally disgraceful fans weigh in.

@robdelaney @netanyahu He wants a red line drawn on Iran's nuclear progress. can we send him there with a bucket of paint?

@robdelaney Netanyahu's the one talking the most & loudest. That always screams trouble…a lot of trouble.

And, naturally, Mr. Delaney is very civil when people disagree with him, too.

People who tell me what I should/shouldn’t tweet can eat my fuck in the back of my Hyundai Sonata today at 3pm while your dad films it.

Stay classy! And take your head out from where the sun don’t shine. If you want to see some actual crazy and dangerous, take a look at Ahmadinejad who just yesterday railed against “uncivilized Zionists.“

Not so hilarious now, is it, funny man?

Update: David Limbaugh puts it in a nutshell.