Abandoned buildings are typically synonymous with urban blight and decay. That said, they can also be fertile ground for inventive, enterprising street artists seeking to make their mark.

Here are 11 amazing examples of art filling the vacuum of an abandoned building.

Earlier this year renowned street artist Hanksy (not Banksy) and his New York City artist friends did something amazing. They took it upon themselves to create an underground gallery show in an abandoned brownstone in Manhattan’s East Village that was slated to be demolished.

The crew covered the inside of the building in art from head to toe. The event was cryptically published on social media telling art lovers how to locate the building by a mural painted out front.

When it was time for the former Parisian night club Les Baines Douches to be transformed into a luxury hotel, the building’s owner invited in 50 artists to turn the space club into a popup street gallery.

Many of the artists (both fine artists and street artists) took it upon themselves to incorporate parts of the building’s demolition into their pieces. An example is the piece above from Sambre that uses the building’s ripped up wooden floor boards.

3.) Buildings can be people too.

Russian artist Nikita Nomerz doesn’t deface buildings, he re-faces them. Literally. Nomerz (not his real name) adds human faces to the abandoned structures he works on. The results are refreshing and add an inspirational element to the areas he works in. They’re also just a little bit creepy.

Nomerz is from the western Russian city of Nizhniy Novgorod. Originally his goal was to bring some life to the unused buildings in his city. He has since brought his unique art to other cities across the country. “I position myself as a creator,” he said. “With my street art work, I fill the urban emptiness.”

When a nine floor apartment building in Paris is abandoned and destined for destruction, would you just let it sit there peacefully? Some people might, but not gallery owner Mehdi Ben Cheikh.

Cheikh secured permission and then invited a crew of 100 international artists to cover every square inch of the inside of the building’s 36 apartments in art. The temporary tower of street art was dubbed the Paris 13 Tower. 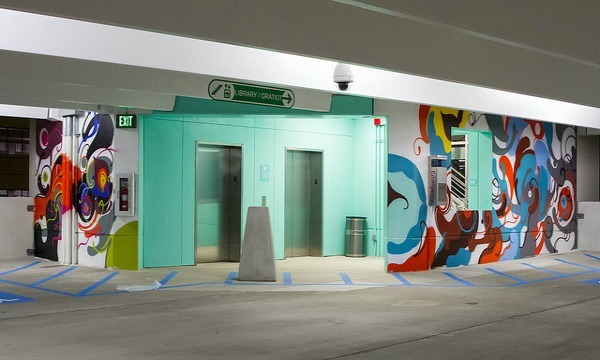 Detroit has become synonymous with American urban decay. For many artists that means it’s an area just begging for an artsy revitalization. Which is where the Z Project comes in.

The Z Project is an underground movement whose aim is to breath new life into Detroit though art. Their biggest project at the moment is renovating a 10 story parking garage with art. The organization has managed to fill the entire space with amazing murals created by artists from all over the world. As the space is filled, the murals are painted over and new ones are put up so that there is a constant stream of new art. 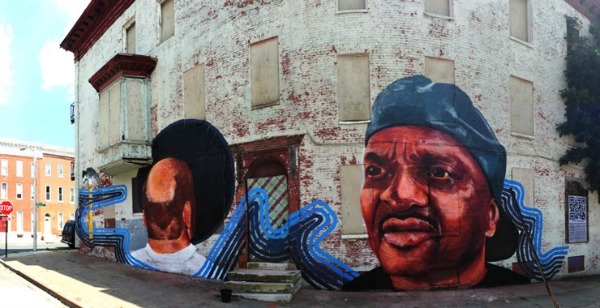 The Slumlord project in Baltimore, Maryland is the perfect intersection of activism and art. Artists have put up murals on some of the city’s many abandoned buildings as a way to draw attention to what has become known as Baltimore’s “vacancy problem.”

It’s estimated there are between 16,000 and 40,000 abandoned buildings in Baltimore. Residents say the city government will not acknowledge the problem and landlords are just letting the buildings decay. The murals all contain inspiration messages for residents reminding them not to give up the fight for their neighborhoods.

These creepy ghosts are the work of Brazilian artist Herbert Baglione. Creating shadows is one of Baglione’s specialities. While on vacation in Italy Baglione took it upon himself to add shadows to the walls of this abandoned psychiatric facility.

They also serve a solemn reminder of the tortured souls who spent their lives within the walls of the facility.

8.) Underground art in the nation’s capital

In December 2013 street artists in Washington D.C. were given free reign over an abandoned building in the city’s south side. The building formerly housed the National Geospatial-Intelligence Agency, AKA the government branch the builds spy satellites.

After their headquarters moved the building was slated to be razed. The developer decided that before the demolition in, they would give local street artists the chance to practice their craft in, on, and around the building. 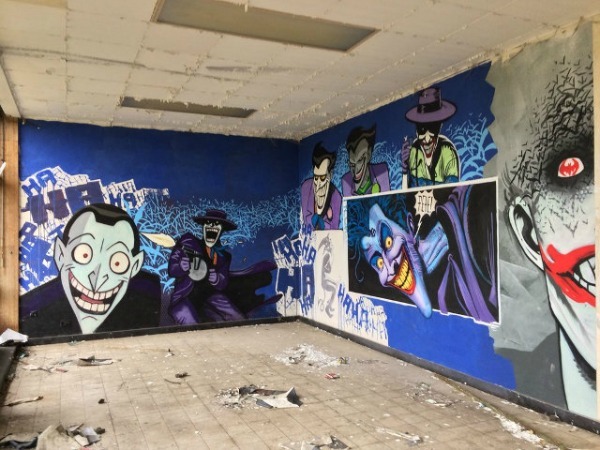 Belgian artist PETE ONE loves Batman.  This hidden urban gallery of Batman and Joker love was found by a Redditer doing some urban exploring.

Artists Ella and Pitr  in the French city of Saint-Etienne took a unique approach to draw attention to their run down neighborhood. The duo created some truly original mind bending optical illusion art.

They worked with local volunteers for a photo series showcasing their work. “Trippy” is probably the best way to describe it. 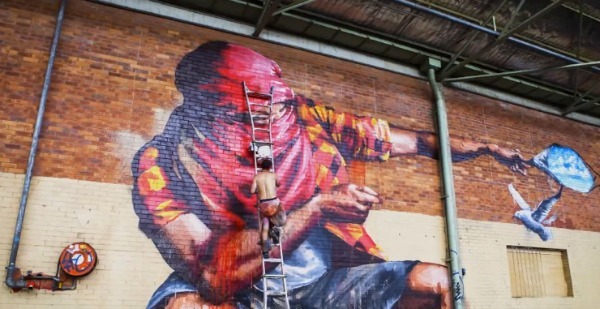 When you bring in the artist collective known as Sofles you get magic. The crew was recently let loose in an abandoned warehouse with an unlimited supply of paint and time. Over the course of the next several hours the fading brick walls came to life with amazing murals of fantastical scenes and exaggerated portraits.

Just amazing. I can think of a few buildings in my neighborhood that could use this treatment. Don’t forget to share these photos by clicking below.