The first Vice Presidential Debate of the 2016 election cycle was held on Tuesday, October 4 at Longwood University in Farmville, Virginia.

And as is the case for most debates, facts did not always reign supreme when Governor Mike Pence (R-IN) and Senator Tim Kaine (D-VA) started talking. Although human error is inevitable, it’s always useful to parse out where our leaders fall short during debates since they’re vying to, you know, help run the country and all that.

Here are 10 points at which our potential VPs missed the mark last night.

1. Mike Pence: “Well, first off, thank you, Elaine, and thank you to Norwood University for the wonderful hospitality and the Commission on Presidential Debates.”

The Facts: This debate was held at Longwood University, not Norwood.

2. Mike Pence: “We’ve seen an economy stifled by more taxes, more regulation, a war on coal and a failing healthcare reform come to be known as Obamacare.” 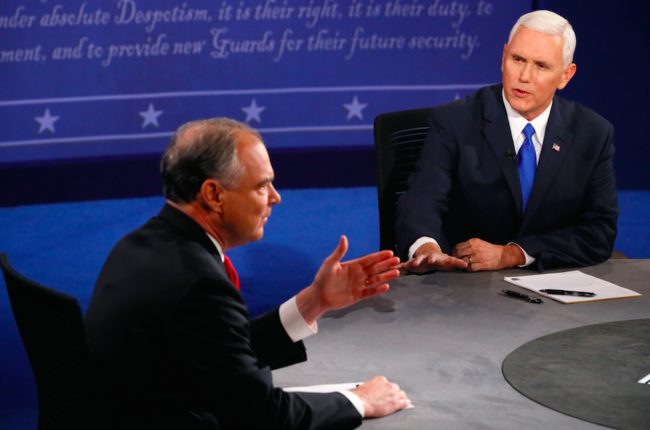 The Facts: Although Pence is correct in stating that taxes have increased, they’ve really only gone up for the wealthiest in the country. The top rate under Obama for the super rich rose from 35 percent to 39.6 percent.

Healthcare is a point of contention, but about 20 million more Americans have access to health insurance under the Affordable Care Act. To say that it is “failing” is not necessarily accurate on the coverage front, but changes must be made to better serve small business owners.

3. Tim Kaine: “She worked a tough negotiation with nations around the world to eliminate the Iranian nuclear weapons program without firing a shot.”

The Facts: Final negotiations for the Iran Deal itself concluded in 2015 after Hillary Clinton finished her tenure as Secretary of State. That being said, a major priority of hers as Secretary was to increase international sanctions on Iran. Her role was integral but less direct than Kaine’s assessment.

Kaine’s understanding of Iran Deal parameters is also faulty, since it did not eliminate Iran’s nuclear program. Instead, it forced the nation to discard stockpiles of medium and low enriched uranium and to allow officials to investigate nuclear facilities periodically. That being said, experts argue that this was the best possible outcome.

4. Mike Pence: Together, he and Donald Trump will repeal all executive orders that “Barack Obama has signed that are stifling economic growth in this economy.”

The Facts: While this has become somewhat of a standby for Republicans, the critique is unsound. According to the Organization for Economic Cooperation and Development, “Output has surpassed its pre-crisis peak by 10 percent, robust private-sector employment gains have sharply reduced unemployment, fiscal sustainability has been largely restored, and corporate profits are high” under President Obama.

5. Mike Pence: “[Trump is] worth billions of dollars.”

The Facts: Donald Trump’s financial status is murky, and his unwillingness to release his tax returns only leaves room for questions. This may not necessarily be a blatant lie, but it is shrouded in doubt due to lack of evidence. Studies have gathered data from across the spectrum, with Forbes estimating his net worth to be about $3.7 billion and journalist Timothy O’Brien making an estimate of about $250 million.

6. Mike Pence: “Hillary Clinton and Tim Kaine want to continue the policies of open borders, amnesty, catch and release, sanctuary cities, all the things that are driving wages down in this country.”

The Facts: According to NPR correspondent John Burnett, “Most experts say there’s little to support the claim that workers in the country illegally take U.S. jobs.” When they do work, these laborers tend to drive down wages in low-level occupations, but publications like The New York Times argue that their presence actually drives up income for U.S.-born workers in mid and high-level positions.

7. Tim Kaine: He claimed at one point in the debate that 15 million jobs were created under the Obama administration.

The Facts: Politifact rated this statement as being half true, since only a few studies have claimed an increase of 15 million jobs under President Obama. In studies that cite more comprehensive data sets, the figure falls closer to 10.6 million. It’s a case of cherry-picking.

8. Tim Kaine: “Donald Trump wrote a book and he said Social Security is a Ponzi scheme and privatization would be good for all of us.”

The Facts: Although Trump has said in the past that he didn’t support Social Security and preferred privatization, he has remained largely on-message in this election cycle with promises to keep the program in its current format.

9. Mike Pence: “We delivered $400 million in cash as a ransom payment for Americans held by the radical mullahs in Tehran.” 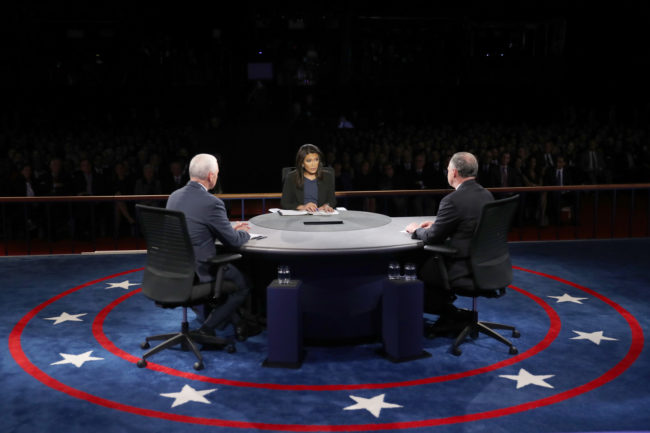 The Facts: According to Politifact, which rated this claim as being mostly false, “Iran received the payment on the same day that American prisoners were released, but experts said this was not ransom. The United States owed Iran the money as part of a decades-long financial dispute.”

10. Tim Kaine: At one point, he claimed that Trump and Pence both opposed a federal increase on the minimum wage.

The Facts: Although Trump once said that he didn’t support such an increase, he did claim in July that the minimum wage needed to go up. When a journalist asked for clarification, he stated that it had to happen on a federal level. Pence is the one who has shown more reluctance.

It’s safe to say that both VP candidates need to brush up a bit. For more details, check out NPR’s full fact-checking transcript here.

Previous Post: Notice something fishy about Obama’s vow to look into VA scandal?
Next Post: Ted Cruz: Nothing about this White House website screenshot is true [pic]