7 Siblings Were Separated As Kids, But Reunited To Catch Up In The Sweetest Way

Reddit user Averne was raised as an only child. While in class with a particularly awful teacher, she was reduced to tears when the woman made students raise their hands if they had brothers or sisters, and then went on to say how “lonely” and “sad” it must be for those who didn’t.

When she got home that day, her mom dried her tears and told her the truth. She told her daughter that she was adopted, and she didn’t just have one sibling out there in the world — she had six.

They were separated from each other at a young age when their birth parents’ unstable relationship dissolved. The three eldest went to stay with their maternal grandfather, while she and another sibling were adopted into different families. The two youngest were placed with a family together.

After that emotional day, she grew up knowing that she was adopted and knowing that her parents loved her — but she also never felt like she was completely understood. After years of searching, she finally felt that connection when all seven siblings met in the same room for the first time.

They brought along a photographer and set out to recreate the memories they would have made if they’d grown up together.

They had met in smaller groups before, but never all together.

Here they are “reading” their sister’s memoir about their unusual family situation. 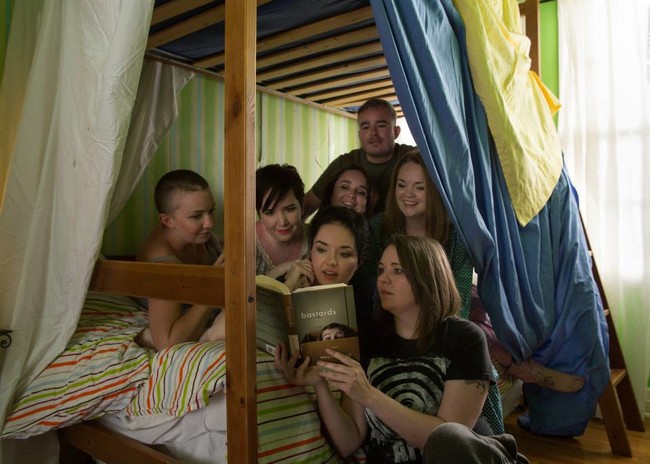 After being scattered across the country, it’s easy to see how happy they are to have found each other.

And to make up for all that lost time.

The only “fighting” between these sisters was of the tickle variety.

They even bonded over a shared loved of music.

Despite all the time and distance that kept them apart, they are a family.

And they won’t be torn apart ever again.

It’s incredible to see how much a family bond can withstand against unpredictable odds. Hopefully they won’t have to wait too long before their next big reunion.

Previous Post: A Hospital Is The Last Place I’d Expect For This To Happen. Fate Works In Amazing Ways.
Next Post: When Your Dad Trades You For A Camel…