Amazingly Stupid Construction Ideas That No One Seemed to Object To

I can totally do construction! Anyone can! You just, like, nail stuff together, no big deal. … right?

That’s at least what these people thought, and the results are hilariously terrible. We’re showcasing some of their, ah, projects for your amusement. We just hope that no one got hurt as a result, although we do kind of hope that at someone got at least a very stern reprimand for these…and maybe some suggestions on a new career path.

1.) Every nine years, the magical doorway opens and leads to a fantastical land.

2.) Enjoy the ocean scenery with a nice cold metal bar under your legs. Relaxing!

3.) This idea failed not once, but four times, but they had a plan and they were sticking to it, dangit.

4.) This is what the city really thinks of cyclists.

5.) And this is what the city really thinks of kids.

6.) I should have measured before redoing the bathroom? Don’t be silly. What do you mean this defeats the purpose of a bathroom door?

8.) Look, just because you’re in a wheelchair doesn’t mean you don’t want to be extreme.

11.) We’re all gonna be real close friends after this.

12.) REAL CLOSE FRIENDS. And if you have gastrointestinal distress, you know which toilet to use. 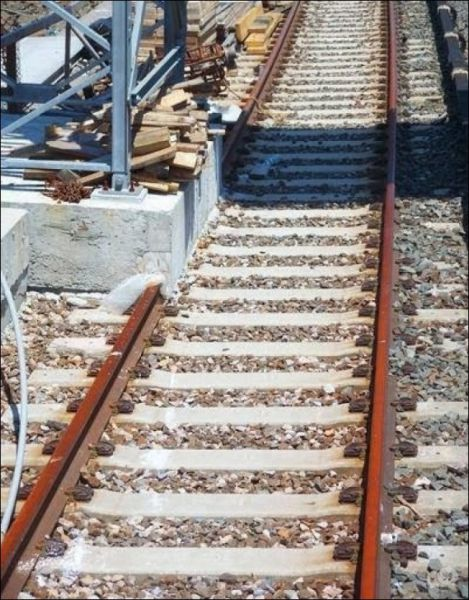 14.) Just keeping you on your toes. Pay attention!

15.) No, see this way, you can catch the water AND plug in your hairdryer while saving space.

17.) Heh heh, no one will ever see this stealthy security system back here.

19.) And you’re just too big. Clearly your fault as well.

20.) In this technological age, we like to keep our customers close to nature. Like really close. Also to an I-beam.

21.) I told you. There’s NOTHING in that closet. Those scratches and moans you hear are just the house settling.

24.) It serves THREE purposes when you think about it!

26.) The porch is going to be added later! Some people just don’t have foresight, jeez.

28.) Oh, that’s the super secret party balcony so no one inside can see us.

29.) Each Christmas, the Millers took down the curtains to share their beautiful Season’s Greetings bricks to the neighbors.

They say “measure twice, cut once.” The people responsible for these projects? They obviously have never heard of that phrase.