It’s Not Often That Serial Killers Work In Pairs, But These 5 Couples Are Exceptions

When we hear the words “serial killer,” we tend to think of a lone wolf who commits heinous crimes out of view.

However, that isn’t always the case. While some killers are joined by their children, others make up halves of murderous couples. Whatever it may be that motivates them to kill, it’s clear that some love doing it together. Here are five deadly duos you’d never want to run into alone.

Read More: There Aren’t Many Known Female Serial Killers, But This Woman Was One Of The Worst

After Michael divorced his first wife, he got remarried to Suzan.

The couple became heavy drug users and began going by “the Bears” after converting to Islam and moving to the Haight-Ashbury neighborhood in San Fransisco. They committed their first murder in 1981, stabbing their 22-year-old roommate, Keryn Barnes, 13 times and crushing her skull with a frying pan in their shared apartment.

They killed at least two other people between 1981 and 1983, claiming that their victims were all witches that needed to be exterminated. When they were finally caught after a high-speed police chase, they called a press conference to confess to all of the murders, but later withdrew their confessions before standing trial. They were both convicted of the three killings and received 75 years to life in prison.

Coleman and Brown killed eight people and raped most of them across six states in 1984.

Many of their victims had been their friends’ young daughters. The two only met a year before that when Brown was engaged to be married, but she quickly left her fiance and moved in with Coleman. Brown suffered head trauma when she was a little girl and was diagnosed with dependent personality disorder, so her relationship with Coleman became akin to that of a master and slave, though she willingly helped with the murders.

When they were arrested for their crimes, they were both sentenced to death in Ohio, but Brown’s sentence was changed to life in prison because of her low IQ scores and the belief that Coleman had influenced her actions. Coleman was executed in 2002. 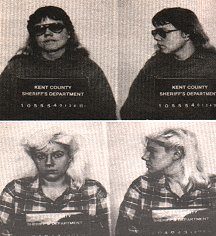 These two met while working at the Alpine Manor Nursing Home in Grand Rapids, Michigan.

They became lovers in 1986 and went on to smother five elderly women together in the next year. Wood later claimed that the murders had been a game and a bond of love for them, since they counted and kept track of each kill.

The couple eventually broke up, and Wood’s ex-husband went to the police in 1988 after finding out about the murders. In exchange for reduced murder charges, Wood confessed everything and received two 20-year prison sentences. Graham received five life sentences.

This Canadian couple videotaped raping, torturing, and murdering at least two young women together between 1990 and 1992.

Before that, Homolka allowed Bernardo to rape her own sister after he’d become obsessed with her, and she died as a result of being drugged. However, her death was ruled an accident.

They were arrested in 1993, but Homolka only received 12 years for manslaughter after successfully getting a plea deal in exchange for testimony against Bernardo. She told investigators that he forced her to join in on the murders, but the videotapes later proved that she was very willing. She was released from prison in 2005 and changed her name to Leanne Teale and married another man. Bernardo was sentenced to life in prison without parole for at least 25 years. He’s still in jail today.

This English couple may look innocent and wholesome, but they were cold-blooded killers, rapists, and torturers.

When Fred went to prison in the early 1970s, Rosemary savagely beat his step-daughter, Charmaine, and became angry when she wouldn’t cry. She killed her while Fred was still incarcerated. The couple also murdered Charmaine’s mother, who was Fred’s ex-wife.

In addition to raping their other daughters, they murdered at least 11 women together. Their horrific crimes also included torturing and mutilating their victims before burying them in and around their home, which became known as the “House of Horrors.” Rosemary was finally convicted of 10 murders in 1995 and was sentenced to life in prison. Fred killed himself in jail while awaiting trial.

Read More: Richard Speck Was One Of The Most Sadistic Serial Killers Of All Time

What disturbs me the most is how ordinary some of these people look. It’s terrifying to think that we’ll never know the what people we pass on the street every day are like behind closed doors.

Previous Post: Be Sure Your Strap Is Locked Before You Rock
Next Post: Ann Coulter, who boosted Herman Cain, calls Sen. Marco Rubio a “novelty candidate”