My New Hero Is This 6 Year-Old Boy. You’re Gonna Love What He Just Did.

Kids say and do the funniest things (there’s a reason why Kids Say the Darndest Things was on television). They’re like tiny, hilarious geniuses. What 6 year-old Ronnie did, though, might just take the cake and make him my new hero forever. Ronnie really loved playing his PSP, which is a portable gaming device. His teacher, Mrs. Clifton, said that he couldn’t bring it to class any more. Instead of just listening to his teacher, Ronnie attempted to pull some James Bond-level forgery. He gave his teacher this note from “his mother.” 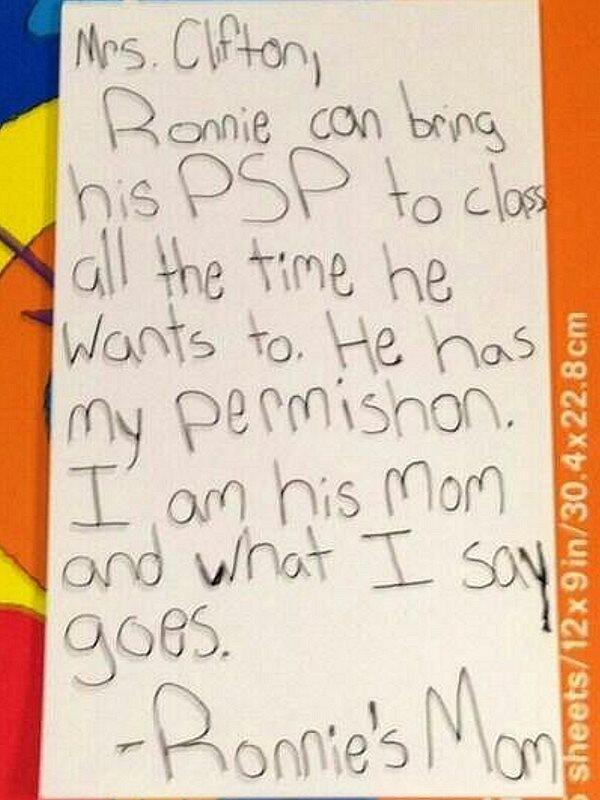 (H/T Elite Daily) Signing it “Ronnie’s Mom” was the dead giveaway that it was a fake (that and the childish handwriting in pencil). You’ve got to give it to Ronnie, though. What he did took some major guts. He is awesome.

Previous Post: Protesters take to streets of DC to march against Muslim Brotherhood, Obama [pics]
Next Post: On Google Maps, You Would Think This Is A Booming City In The Desert. But Zoom In And… OMG.