On Google Maps, You Would Think This Is A Booming City In The Desert. But Zoom In And… OMG.

When you see Wadi us-Salaam, which means “Valley of Peace,” on Google Maps, you’ll have no idea what it is. From a distance, it looks like a bustling, sprawling city in Iraq, full of neighborhoods and office buildings. It covers more than 1,485 acres, which is about the size of a small town in the US. However, when you zoom in a little closer (and do some research), you’ll realize it’s definitely not a city. Although it does have the people…

It’s actually a massive GRAVEYARD. The record-breaking graveyard contains millions of bodies, making it one of the largest on earth.

There are more bodies in here than most cities’ populations.

There is a Shiite belief that says souls of all faithful men and women will journey there, no matter where their bodies actually are.

And there’s a military presence due to the violence that has often occurred here. 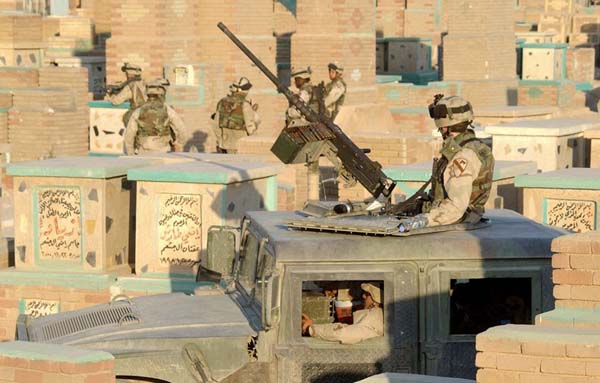 Taking a closer look, you can see tombstones and memorials for the dead.

It’s so big that visitors often use bicycles.

A man is seen mourning the loss of a loved one.

And religious leaders often come to pray and worship there.

People have been buried in the cemetery for over 1,400 years, resulting in literally millions of bodies there. It’s estimated that over 500,000 additional bodies are buried here each year.

During the Iraq war in 2003, fighters in the Iraqi militia frequently used the cemetery to hide in, ambushing enemies. They knew the winding lanes and mausoleums better than anyone else. Since the wars and violence, the graveyard has expanded massively.

Previous Post: My New Hero Is This 6 Year-Old Boy. You’re Gonna Love What He Just Did.
Next Post: ‘Sadimir Putin’? Check out Putin’s face at the USA-Russia ice hockey game [pic]