People Are Extremely Angry About This Cheerleader’s Facebook Pictures. You’ll See Why.

Kendall Jones is a cheerleader for the Red Raiders of Texas Tech University, but what some people are hoping she gets penalized for has nothing to do with anything that’s happened on the athletic fields, but on the Internet. 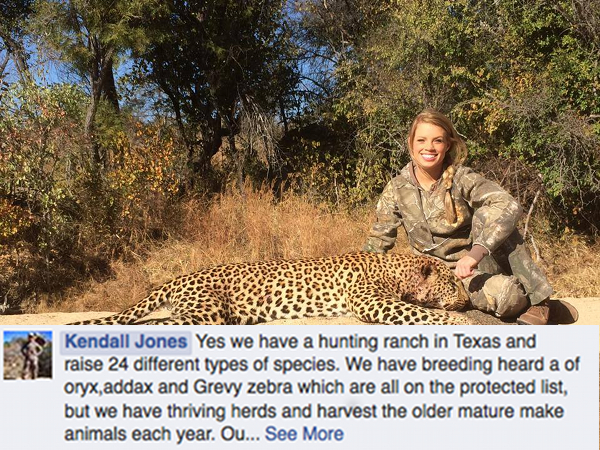 Jones, a proud hunter, posted pictures of her posing with her “trophies” to her Facebook page. The pictures, which feature her holding the carcasses of lions, tigers, leopards, and other big game, have drawn the ire of those who think they are displays of animal cruelty. So far, over 130,000 people have signed a petition to make Jones remove the pictures for that reason.

(H/T Elite Daily) However, the 19-year-old Texan isn’t going down without a fight. Though Facebook has removed some of the content in question remain from her page, which is liked by close to 170,000 Facebook users, she’s decided to continue defending her acts on “Support Kendall,” a Facebook page that has been liked by nearly 75,000 people. On both pages, Jones describes her actions as legal and her pictures as a promotion of ethical conservationism. Share this post using the button below.