People Are Totally Freaking Out Over This Swing, And You Will Be Too When You See It

This hiking trail on the island of O’ahu is made up of almost 4,000 steps, and it provides climbers with unbeatable views from atop the Ko’olau mountain range. The only catch? Sadly, it’s been illegal to use the trail since 1987, and a storm rendered the stairs totally unsafe in 2015.

And if you know anything whatsoever about humans, you know that plenty of people go right ahead and ignore all of that nonsense on a daily basis.

In fact, one search on Yelp yields hundreds of reviews written by daredevils who decided to climb the Haiku Stairs anyway. 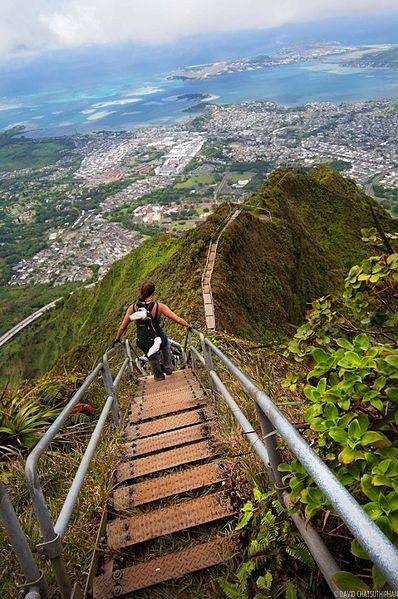 One such daredevil built a swing alongside the trail because that doesn’t sound like a terrible idea at all.

As you might imagine, young people have taken it upon themselves to say, “You know what? I’m going to swing on it because who even values human life, am I right?”

Ah, youths. They’re so artistic and definitely not stupid at all.

Needless to say, authorities were nice and angry when they realized that they’d most likely been duped by teens with some rope and a wooden plank. Here’s some news coverage read by adults with functioning brains.

I’m willing to bet any amount of money that the people behind this swing set it up for Instagram.

After all, if you don’t constantly provide total strangers with proof of your life experiences, they didn’t even happen! Science. To learn more about this story of pure, unadulterated stupidity, check this out.