The Sculptures In This Exhibit Are Amazing, But So Are The Walls. Just Look…

Milanese artist Matteo Pugliese draws on the artistic tradition Italy has to offer in the form of sculptures. Pugliese creates massive bronze figures that are both classical and modern. The figures certainly owe a lot to the works of the old masters, but the way they were created is a purely modern approach.

Tra Due Mondi (Between Two Worlds)

Pugliese’s rough-hewn, muscular male figures are not created as single, complete human forms. Rather, they’re a collection of heads, hands, feet, and limbs carefully arranged on a surface. The resulting illusion is that it appears his figures are escaping from, or sinking into, the surface on which they hang. Pugliese prefers to display his work on plain white walls, so the color and texture of the bronze stands out. Many of his patrons put their pieces on textured walls or even mirrors. The sculptures and surfaces interact via shadows and reflections, creating a different feeling each time. Because of the way the body parts are placed, the viewer can imagine the position of the rest of the body as though it existed beyond the wall.

Ad Astra (To the Stars) 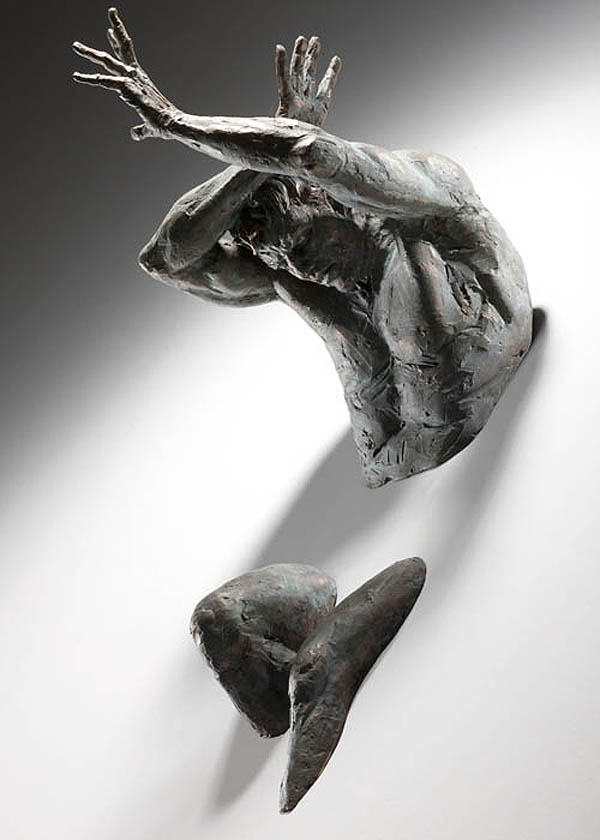 Matteo Pugliese
Pugliese with one of his sculptures, to give an idea of their size.

Pugliese also draws inspiration from science fiction films and animation. Remarkably, Pugliese has never had any formal art training, although he studied art criticism. This body of work, called Extra Moenia (“outside the walls”), began in 1998 and continues today.