As it turns out, children’s stories aren’t all puppies and sunshine (no matter what you thought growing up). As it turns out, most of the famous nursery rhymes and fairy tales have a really dark origin.

Wikimedia Commons/Alexander Zick
“So, if I agree to feed you, you’ll totally blind my step-sisters, right?”

There are many different versions of the Cinderella story from all over the world, the earliest known variant being the Greco-Egyptian tale of Rhodopis. Most people today, though, know the story of Cinderella through Disney’s 1950 animated version. This version is based almost exactly on the 1697 version of Cendrillon by French author Charles Perrault, with some singing mice added in for fun. But this is the nice version. There are two others that were deemed unfit, and rightly so, for children. The Grimm brothers’ Aschenputtel features the wicked stepsisters getting their comeuppance by first slicing off bits of their feet to get into the famed slipper, which has been, over the years, glass, gold and fur. When that doesn’t work, they still attend the wedding, only to have their eyes pecked out by birds. The Italian version, Zezolla, or “Cat Cinderella,” by Giambattista Basile, finds the Cinderella figure killing her step mother by breaking her neck.

Wikimedia Commons/Gustave Dore
“Ugh, we really have to clean this castle out when you wake up.”

The Grimms’ Sleeping Beauty, also called Briar Rose, plays out similarly to Disney’s 1959 animated feature. Except for the hundreds of rotting bodies. See, everyone in the castle falls asleep for a hundred years and exists in a magical suspended animation. Outside, a thick forest of thorn bushes grow, preventing anyone from coming in and breaking the spell. That doesn’t stop people from trying, though, and as a result, they all die in the thorns. A century after the spell is cast, it expires and the briars simply turn into flowers by the time the lucky prince happens by. The flowers probably didn’t really help with all those corpses lying around, though. Going back farther, we find that, like with Cinderella, the Grimms borrowed heavily from a Basile story called “Sun, Moon and Talia,” in which Talia, the Sleeping Beauty figure, is raped by a king while she sleeps and gives birth to twins. The babies are born while she’s still sleeping, and wake her by sucking an enchanted splinter from under her fingernail. She marries the rapist king, but his jealous mother attempts to have the babies killed and served at dinner and to burn Talia, but everything works out and the queen is burned instead. Happily ever after!

“Ha ha, where did you think I got those heads?”

Though there’s some dispute, this little rhyme is commonly associated with Queen Mary I of England, otherwise known as “Bloody Mary,” and who is possibly the origin of the mirror chanting tradition as well. She reigned for only five years, from 1553 to 1558, and was a fierce upholder of the Roman Catholic faith. During her short reign, she executed hundreds of Protestants. The “silver bells” and “cockle shells” are said to be torture devices, while “how does your garden grow” may refer to her lack of heirs. Conversely, the rhyme is also said to be about Mary, Queen of Scots or about Catholicism itself.

Flickr/John Liu
“Eeny meeny…oh, isn’t there a rhyme that can help me choose that comes with less baggage?”

A favorite of indecisive schoolchildren everywhere, there’s nothing immediately about this rhyme. However, a tiger was not originally what they were catching by his toe. No, “tiger” is a relatively recent replacement for the original, which was the n-word. How charming. Even though most people don’t know this, it’s still an uncomfortable truth about the rhyme’s past and will probably leave a bad taste in your mouth. However, there have also been many similar “choosing” rhymes with origins in Ireland, England and Germany, usually using nonsense words and lacking blatant racism. That part came in with the American versions.

If you thought the 1937 Disney version where the prince kisses what’s essentially a dead person in the middle of the woods was weird, you haven’t even begun to dig into this story, which, by the way, also has variants from all over the world. For one thing, the Grimm’s version, which the Disney one is based on, has the wicked queen trying to kill Snow White three times, and in the end, the wicked queen is forced to wear red-hot iron shoes and dance in them until she falls down dead. The Grimms were really into cruel and unusual punishment. But wait. It gets better. Another Basile story, “The Young Slave,” has a young girl being poisoned and placed in seven nesting crystal coffins. However, she grows while in her magical coma. She’s wakened by a jealous aunt who beats her and makes her a slave until she is saved by her uncle, who helps her restore her health and marries her off to a baron. This story might have influenced both Snow White and Sleeping Beauty.

6. The Hunchback of Notre Dame: Even More Torture and Execution

In Victor Hugo’s original, Quasimodo is still in love with the beautiful gypsy girl Esmeralda, and acts as a liaison between her and her lover, the already-engaged Phoebus. Also, in the book, she’s not actually of Roma heritage, because racism, and was actually kidnapped as a child. Anyway, the lustful Archdeacon also desires Esmeralda, and when he finds out about her tryst with Phoebus, he stabs Phoebus and frames her for the attempted murder. Both she and Quasimodo are tortured, and Esmeralda is hanged for murder and her body tossed into a mass grave. Quasimodo crawls in after her and curls up around her corpse and dies. Many years later, the crypt is opened, and their skeletons are found wrapped around each other. Yeah, the Disney version is a lot happier.

7. Here We Go Round the Mulberry Bush: Prison Workouts

Wikimedia Commons
“This is pretty nice for a prison yard.”

Legend has it that this rhyme originated in Wakefield Prison, and English prison for women, where the inmates were brought outside to exercise around a shrub or tree in the yard in the mornings. Mulberries, actually, grow on trees, not bushes, but it’s still an interesting theory.

8. Ring Around the Rosie: Maybe Not the Plague, but Subversion at least

Wikimedia Commons/Jessie Wilcox Smith
“Do we have the plague yet?”

The rhyme is famed for “actually” being about the Bubonic Plague, and I thought this, too, for a long time. “Ring around the rosie” was supposed to reference a skin rash that signified the onset of the plague, and “pocketful of posies” referred to the flowers people carried to mask the stench of death, which was believed to cause the illness. “Ashes” was thought to be a corruption of “achoo” as sneezing or coughing fits were the last symptom before “we all fall down.” You know, as in dead. However, historians highly doubt this. the rhyme first appears in writing in 1881, well after any major plague outbreaks. Early versions of the rhyme don’t even include lyrics about ashes or falling down and mainly seem to be about literal flowers. More than likely, the rhyme was simply rhythmic and charming, and was used by teenagers to subvert religious bans on dancing in the nineteenth century. Like with the Mulberry Bush rhyme, it’s possible that these have no “hidden meanings,” but rather that people just like to dance in circles. 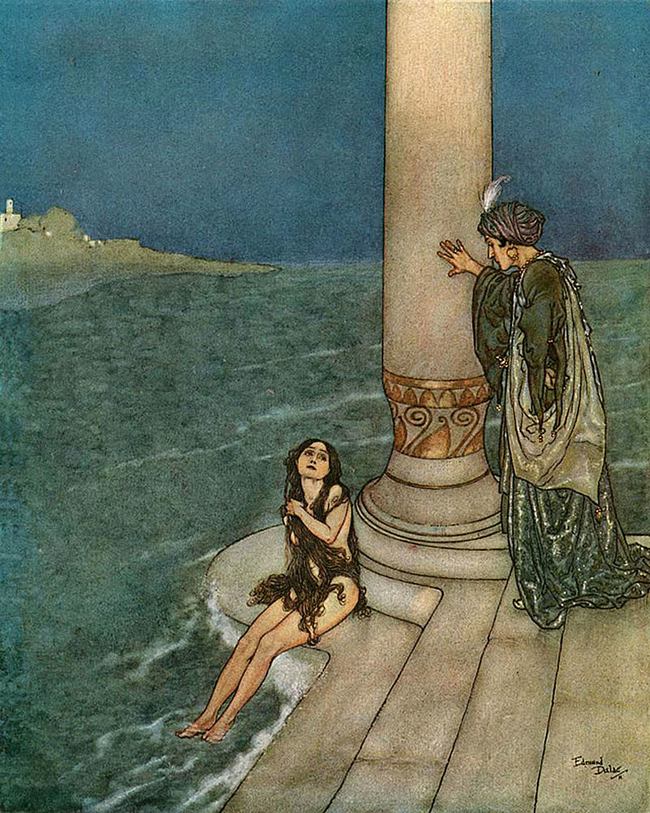 Wikimedia Commons/Edmund Dulac
“Okay, maybe I didn’t think this through.”

Hans Christian Andersen was not a cheerful guy, and his best known fables, this and The Little Match Girl, are evidence of this. In the original mermaid story, the mermaid, in love with a human prince, has her tongue cut out to become a human and, hopefully, win him over. Being a human is painful, though, and it feels like she’s walking on knives. But her love is so great, she dances for the prince anyway. The prince, though, ends up marrying another girl, who he really loves, and the mermaid is heartbroken. The only way for her to return to the sea, though, is to kill the prince. She can’t bring herself to do it, though, and hurls herself into the ocean, where she turns into sea foam. Later, Andersen amended the ending and had her become a “spirit of the air,” because I guess that’s more cheerful?

So, can you still look at your favorite childhood stories and rhymes the same way? Don’t worry, there are plenty more messed-up fairy tales from all over the world, some that stem from actual historical issues, and some just speak to the weirder parts of the human psyche.