These Incredible Walled Cities Around The World Are Basically Fortresses.

Keeping a city safe is never easy. You have threats of crime, weather and all those pesky outsiders who keep trying to besiege you. Okay, the last one might not be quite as prevalent as it used to be (but it still happens!), but protecting the citizens of your burg has been a concern of leaders since cities became a thing about 10,000 years ago.

The easiest way to stop an invading horde was with a barrier, so city planners either dug moats or built walls. Sometimes they did both. We’ve rounded up some breathtaking shots of walled cities from around the world that survive intact to this day, walls and all. 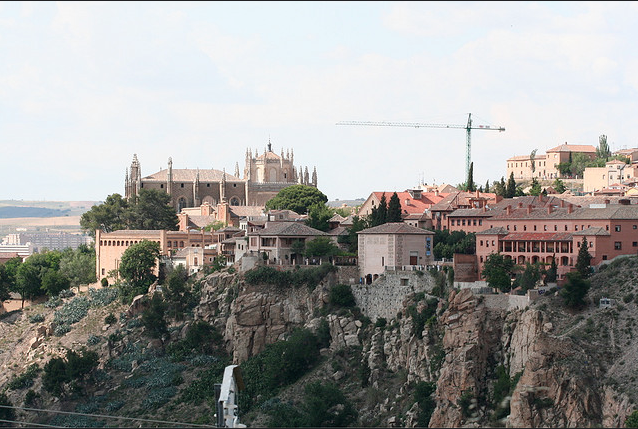 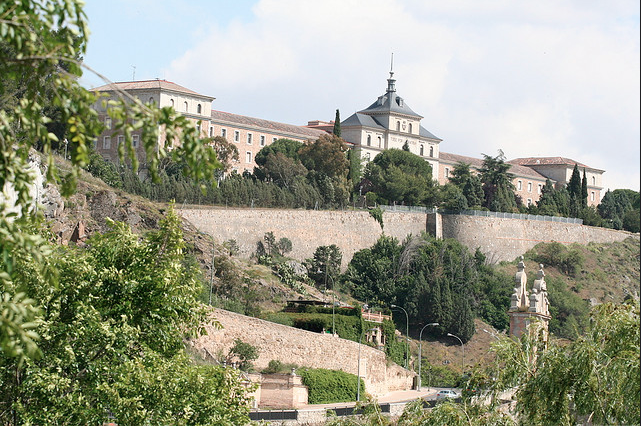 Flickr/Nic McPhee
Toledo technically only has one wall, and that’s because it’s surrounded on three sides by the Tagus River, so it only needed protection on its landward side. Like many of the other cities here, Toledo has a rich past spanning Spain’s Roman, Visigothic and Moorish periods. 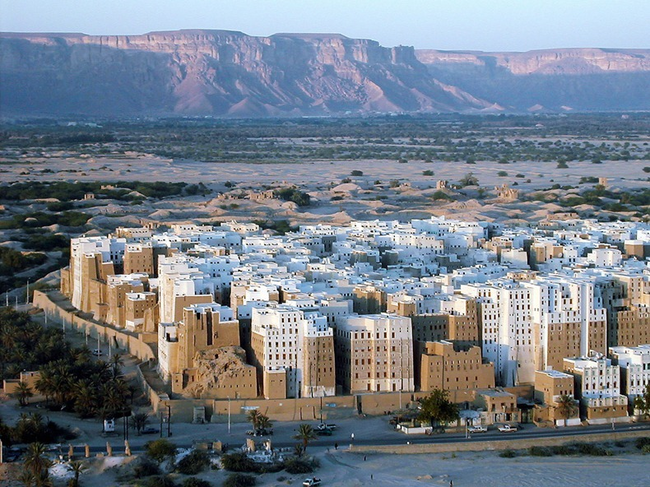 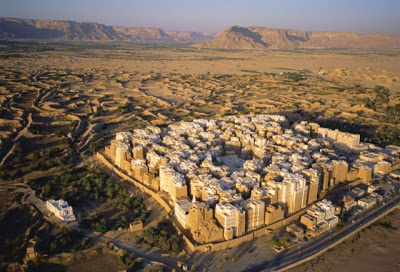 George Steinmetz via Damn Cool Pictures
Shibam looks a lot like a modern city, and is referred to as the “Manhattan of the Desert.” But don’t let its looks fool you. These mud-brick highrises (well, 8 stories) date from the 1500s. It is located at what used to be a pivotal point on the spice and incense caravan route. 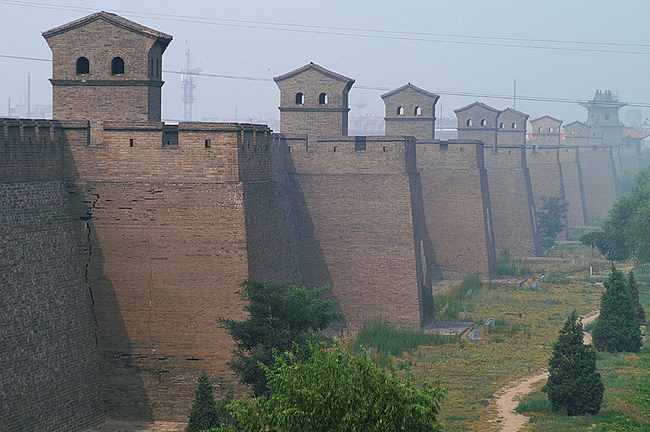 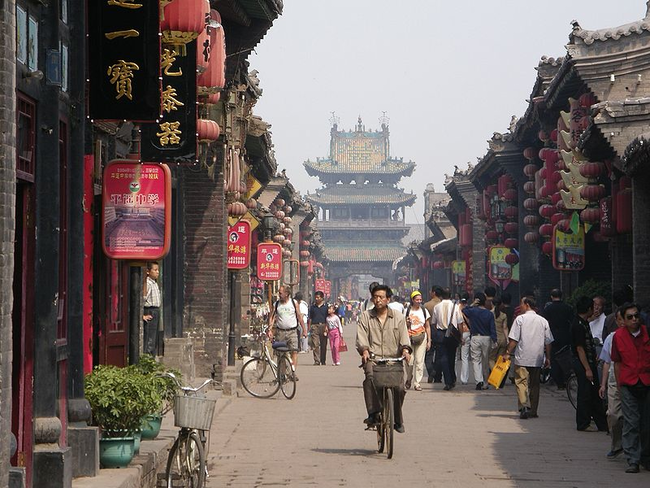 Wikimedia Commons
Pingyao, in the Shanxi province, has the distinction of being the world’s best-preserved walled city. Its history goes back some 2,7000 years, and it’s still bustling today with a population of 50,000. Because of the locations of its six massive gates, its layout resembles a turtle and has earned it the nickname “Turtle City.” 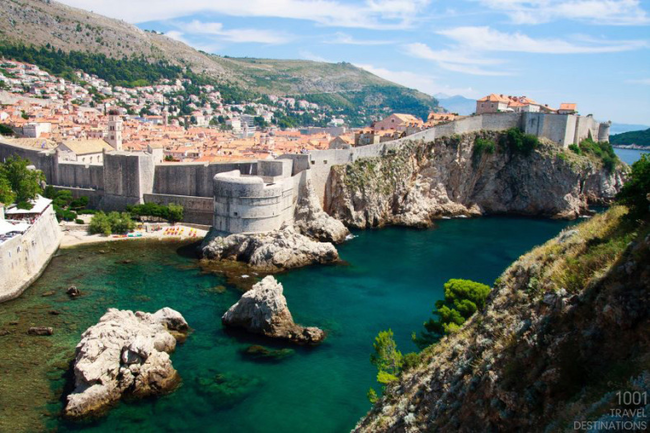 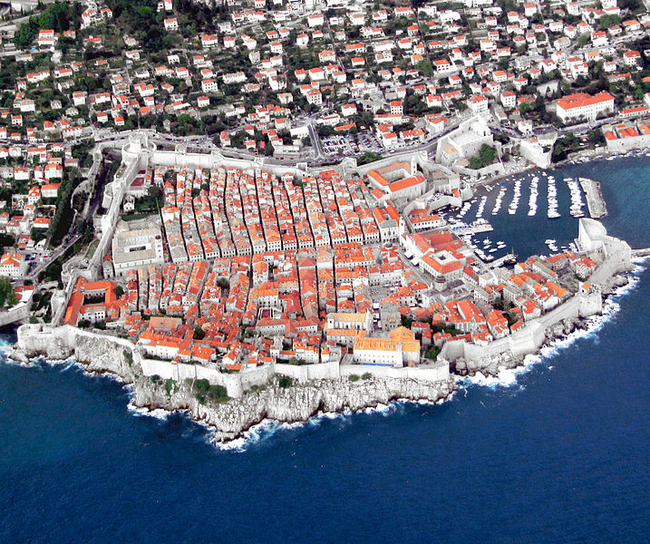 Wikimedia Commons
Dubrovnik is called the “Pearl of the Adriatic” and was for a long time the only Adriatic city that could rival Venice. Today it’s a popular tourist destination, but when it was built in the Middle Ages (it was founded in the 7th century), it was a serious fortification. The walls on the landward side of the city measure four to six meters thick. 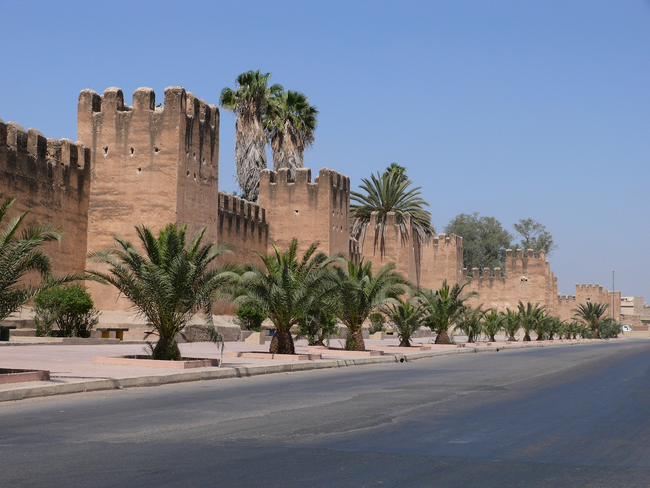 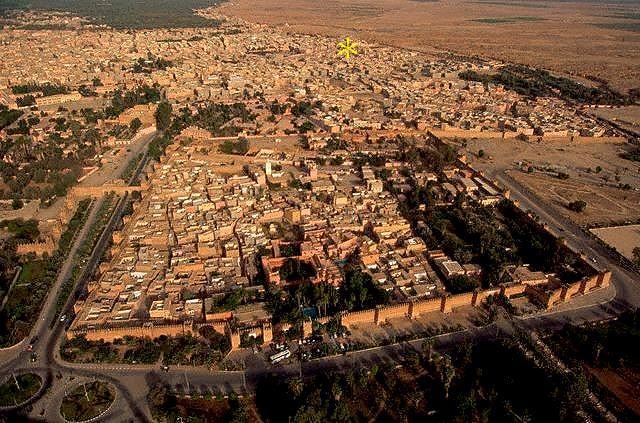 astediscovery
Taroudant is known as the “Grandmother of Marrakech” because it was used in the 16th century as the Saadi dynasty’s capital before Marrakech. The city’s walls and mosque date to 1528, and today it boasts a number of Berber and Arab souks selling all kinds of goods. 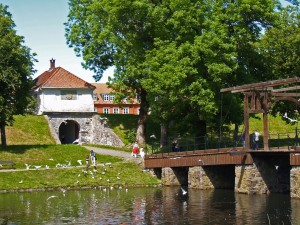 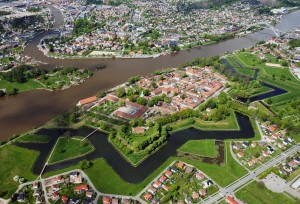 Walled Towns
The wall and moat surrounding Fredrikstad was meant to be temporary, a fortification during the Hannibal War of the 1640s to keep out Swedish forces. But they didn’t seem to want to waste the effort, so they were left, making the city walled and moated to this day. And check out that cool star pattern the moats make. 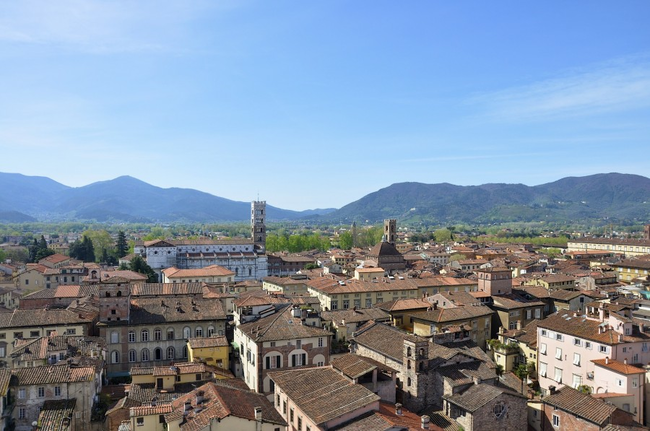 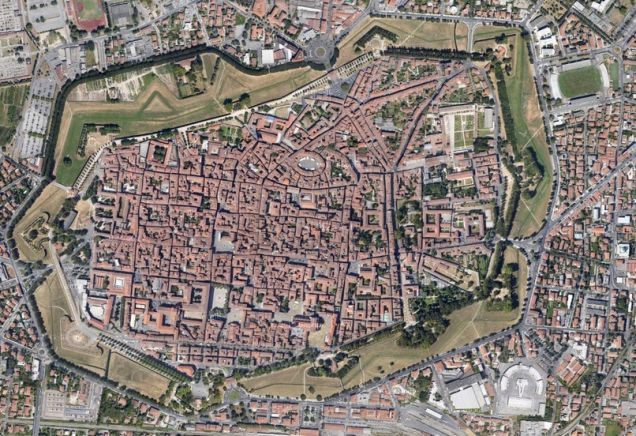 Google Maps
The Tuscan city of Lucca dates back to the time of the Etruscans, and later became a Roman colony. You can still see the Roman-style grid of streets today. Lucca flourished in the medieval and Renaissance periods, and became known as a center of Jewish culture. Despite expansion, its walls have remained intact, and today serve as a pedestrian promenade, and have been used for auto races in the past. 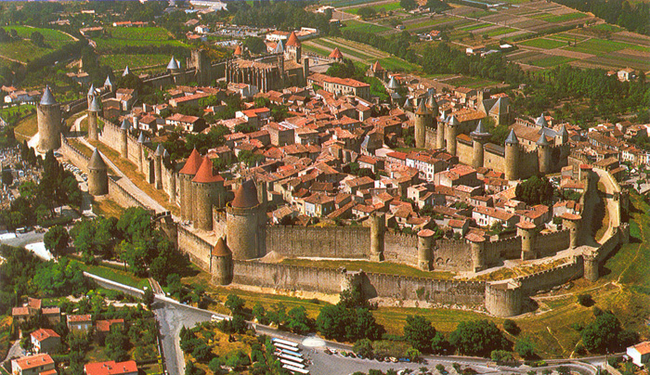 University of North Carolina
Carcassone has been occupied since about 3500 BCE, and has been home to Celts, Romans, Visigoths and Saracens. Despite its breathtaking beauty and history, it was left off Napoleon’s list for national restorations and fell into disrepair, so much so that it was slated for demolition in 1849. But thanks to the uproar that ensued, it was saved, and restorations began in 1853, and they would go on for almost 60 years. 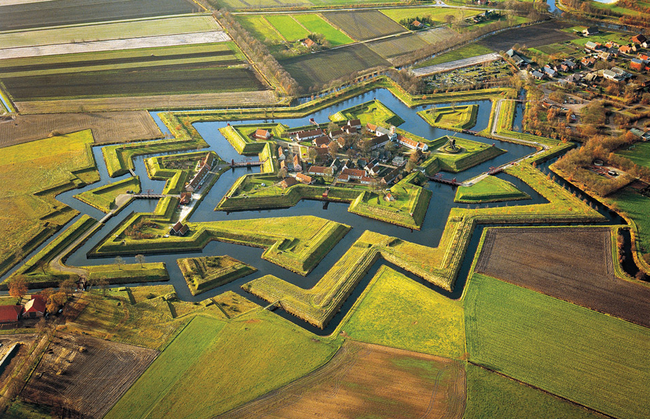 OneBigPhoto
The Netherlands loves them some walled cities, and they love moats, too. Check out these stunningly-planned cities that appear to float! Most of these were constructed in the 16th and 17th centuries, so note the similarity between this and Fredrikstad, from the same period. This is Fort Bourtange-in-Groningen. 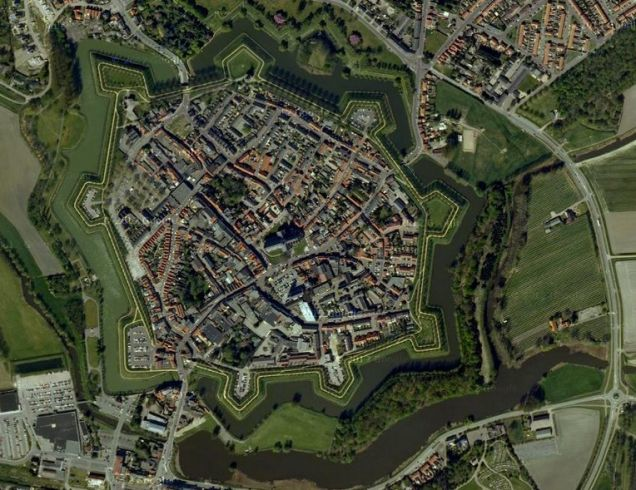 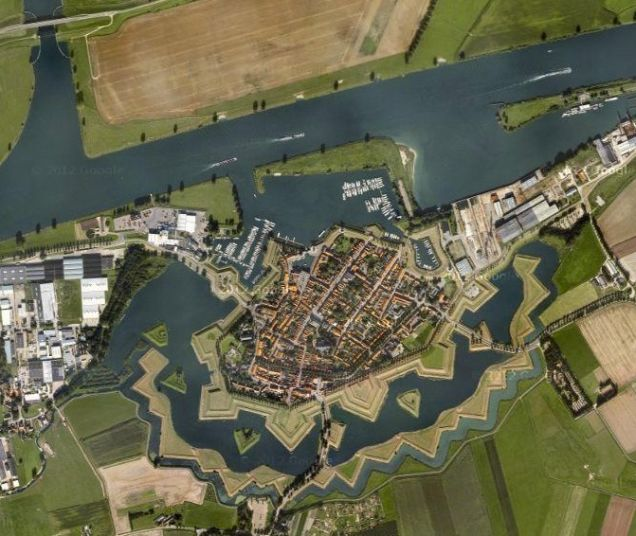 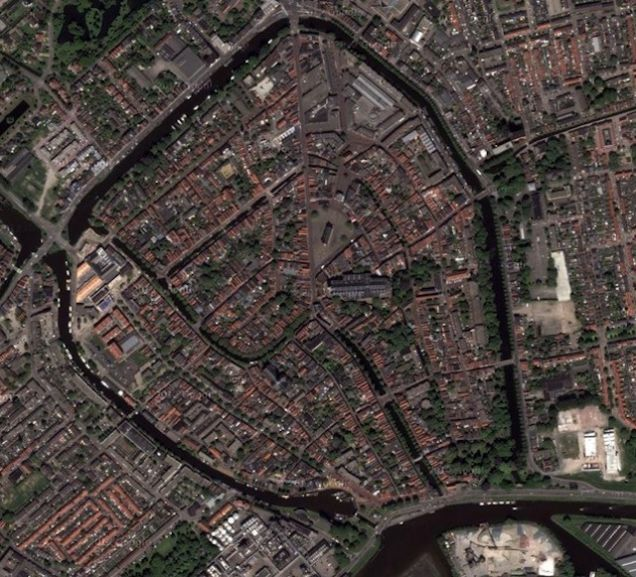 Google Maps
Yes, this is where the cheese comes from.

Walls and moats were, and are, practical ways to keep cities safe and contained. Consider this inspiration for keeping out uninvited guests!