When the Vancouver Police Department trains dogs, they work them hard to see who will make the cut. They need canines who are smarter and braver than the average pooch; ones that won’t disobey a command, no matter the order. Even if that means rappelling off a wall and holding on for dear life!

That doesn’t mean they have to enjoy it, though. While we’re sure this hilarious German shepherd will pass, he simply isn’t able to hide how he feels about this particular test.

Although it seems like he’s holding on, he’s actually attached to the officer. 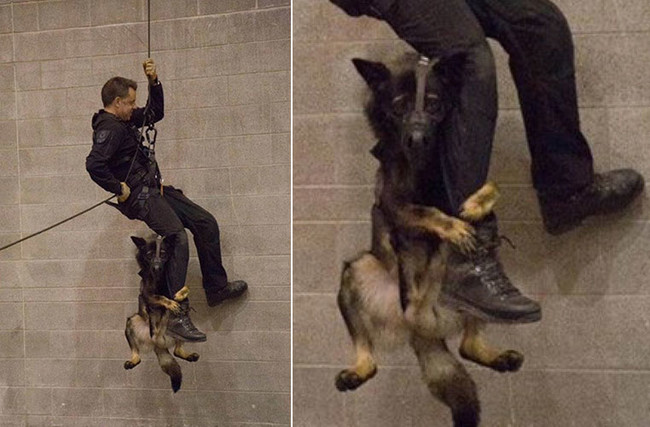 “Rappelling is a vital skill for our tactical teams to have,” the Vancouver Police Department told Mashable. “It tests both handler and dog. In the training scenario in the photo, PSD Niko was introduced slowly to the task, and his handler rewarded him with praise…afterwards.”

We think Niko did great, and so did his handler. But after doing that “trick” a few times, we certainly hope that treat was a little bigger than normal!

Previous Post: I Was Planned, I Was Not…
Next Post: Does Rand Paul really back a ‘path to citizenship’? Update: Looks that way