A photo of Chris Kyle’s burial has surfaced on social media, and it appears to show that more than 100 Navy SEAL trident pins were pounded into the casket by Kyle’s fellow warriors.   A fitting send-off for an American hero. 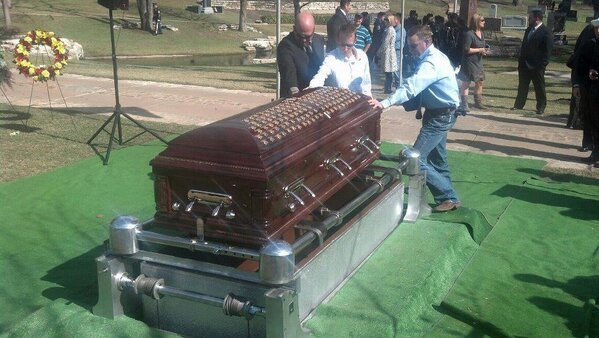 Petty Officer Chris Kyle is laid to rest with his casket adorned by Tridents pounded into it by fellow Navy Seals…. fb.me/xFxOmUeF

LOOK at all the SEAL Tridents on that casket. My God. What a HERO. #RIPChrisKyle twitter.com/dvictor11/stat…

Rest in peace, Chris Kyle. You will indeed be missed.

Our headline was revised to say that the pins were pounded into the casket, not “left” on it.

Previous Post: Dragon Ball Z Interpretation
Next Post: 21 Genius Shoe Tricks That Will Change How You Wear Your Kicks For Good