What This Chimp Did At The 3:10 Mark Of This Video Choked Me Up. It’s A Must See.

Jane Goodall is a British primatologist that is known for being the world’s foremost expert on chimpanzees. She has a great love of animals, but most of all chimps. She formed the Jane Goodall Institute, an international wildlife and environment conservation organization, to help protect those animals she loves so dearly. Some of the work that the Institute does is truly moving. This story of a chimp they brought back from death’s door, for example, is incredible. In the Republic of Congo, the Jane Goodall Institute’s Tchimpounga Chimpanzee Rehabilitation Center found a chimpanzee that was near death. They called her “Wounda,” which meant “close to dying.” You’ll see why.

Wounda was barely alive when she was found. The rescue had to take immediate action to save her life.

Thanks to Dr. Rebeca Atencia, Wounda came back from the dead. The rescue fed her and tended to her diligently.

The chimp was losing weight fast, but thanks to the round-the-clock care by the Institute, she began to fight her illness and put weight back on.

Each morning, the sick girl drank a liter of milk.

After a while, she was healthy and able to fend for herself. It was time to release her. 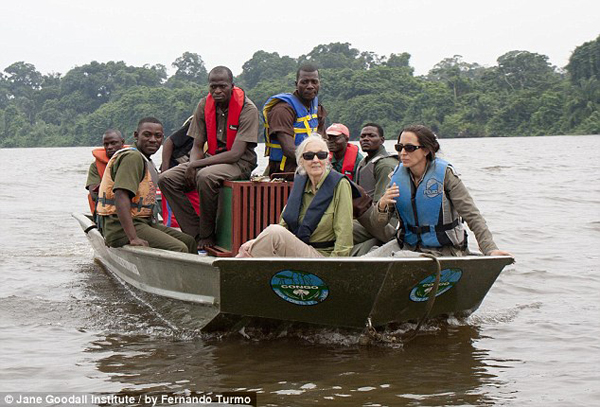 Wounda was ready to be back in the wild with other chimps.

Thanks to the care at Tchimpounga, she was good as new.

Wounda was loaded up into a crate, ready to see her new home.

The rescuers brought her to a sanctuary site on Tchindzoulou Island in the nearby Kouilou River.

But, before exploring her new home, Wounda did something amazing.

She clutched at Jane, giving her a BIG chimpanzee hug.

Wounda was saying “thank you” to her caretakers.

She knew that Jane and the other rescuers were responsible for saving her life.

Then, after the emotional goodbye, she carefully began exploring…

When she realized that she was free and healthy, you could see it on her face.

That’s a look of pure happiness.

She’s going to have a good life here.

You can watch Wounda’s touching release in the video below. When you see what this chimpanzee did in action, you might just need to grab a few tissues. It’s incredible.

Animals have emotions, just like we do. It’s obvious in the video that the chimpanzee was feeling something, whether it was gratitude or just happiness, we’ll never know. I’m just glad that this sweet girl was saved from a terrible fate. Source: Jane Goodall Institute via Daily Mail Bring a smile to the faces of others by sharing this article. Just click on the button below.

Previous Post: They Were Loading A Truck Onto A Barge When This Disastrous Moment Happened
Next Post: Charlie Daniels heaps praise on Ben Carson: ‘Dr. Carson laid it down strong and tight’