Who will replace him? Sen. DeMint resigns to head Heritage; Left hateful

Wow. The Wall Street Journal broke the news that Senator DeMint is resigning in order to head up The Heritage Foundation.

Whoa! Sen DeMint is leaving the Senate to head up Heritage.

Wow, Jim DeMint and Heritage Foundation are trending nationwide on Twitter. Would’ve expected this to be more of a niche story.

Wow.Jim DeMint (R-SC) resigning from the Senate next month to head up Heritage Foundation.Never saw that coming.

The press release from his office:

DeMint to Leave Senate to Lead the Heritage Foundation

WASHINGTON, D.C. — Today, U.S. Senator Jim DeMint (R-South Carolina) announced that he will leave the Senate at the beginning of January to become the next president of The Heritage Foundation, the largest and most respected conservative think tank in America.

“It’s been an honor to serve the people of South Carolina in United States Senate for the past eight years, but now it’s time for me to pass the torch to someone else and take on a new role in the fight for America’s future.

“I’m leaving the Senate now, but I’m not leaving the fight. I’ve decided to join The Heritage Foundation at a time when the conservative movement needs strong leadership in the battle of ideas. No organization is better equipped to lead this fight and I believe my experience in public office as well as in the private sector as a business owner will help Heritage become even more effective in the years to come.

“I’m humbled to follow in the footsteps of Ed Feulner, who built the most important conservative institution in the nation. He has been a friend and mentor for years and I am honored to carry on his legacy of fighting for freedom.

“My constituents know that being a Senator was never going to be my career. I came to Congress as a citizen legislator and I’ve always been determined to leave it as citizen legislator. South Carolina has a deep bench of conservative leaders and I know Governor Haley will select a great replacement.

“One of the most rewarding things I’ve done in the Senate is work with the grassroots to help elect a new generation of leaders who have the courage to fight for the principles of freedom that make this country so great. I’m confident these senators will continue the legacy of conservative leaders before them.”

During his time in office, DeMint has been tireless advocate for Americans taxpayers. His goal has been to support and defend the Constitution, which was written to preserve liberty by restraining the federal government. Toward that end, he authored legislation to balance the budget, ban earmarks, replace the tax code, and reform our entitlement programs. He also led the fight against unconstitutional power grabs like the Wall Street bailout and Obamacare.

Sen. DeMint is a staunch conservative and the Left is, predictably, giddy with hate at the news.

Elizabeth Warren will be a Senator and Jim DeMint won’t.

Ga GOP state sen gets a cushy tax-funded job — kind of thing that makes GOPers nuts when Dems do it.bit.ly/WJ4xlR

SC Senator Jim DeMint leaving Senate for the Heritage Foundation. Thanks for playing!

this one is dedicated to sen. jim demint: youtube.com/watch?v=Sj_9Ci…

i believe sen. demint has had *his* waterloo.

Sen. DeMint said in the press release, “One of the most rewarding things I’ve done in the Senate is work with the grassroots to help elect a new generation of leaders who have the courage to fight for the principles of freedom that make this country so great.”

Good news, conservatives: the Senate Conservatives Fund will continue in the fight after @jimdemint‘s departure: senateconservatives.com/site/post/1674…

Speculation over that next generation started swiftly.

MT @jeffzeleny: DeMint, a thorn in the side of GOP establishment, resigning to run Heritage Foundation. Can Gov. Haley appoint herself?

Gov. Nikki Haley now has the ability to give the US Senate its only black Senator — a conservative from South Carolina named Tim Scott.

Don’t count out Tim Scott just yet. It’s Nikki Haley’s decision. If she offers a Senate seat, who can say no?

RT @peterhambycnn “DeMint has made it known in Columbia that he wants Tim Scott to be appointed to his seat, sources tell CNN”

And, some more jackassery from Willis.

Get it? The GOP is racist and stuff! That’s why they want Tim Scott.

Heritage is celebrating the news, as are other conservatives.

We are excited to announce Sen. @jimdemint as the next president of The Heritage Foundation! herit.ag/11KQWA3

Heritage staff gathering for an all-staff meeting. The mood is electric.

In my nearly 6 years with @heritage, I don’t think I’ve been more excited. Welcome, @jimdemint! herit.ag/11KQWA3 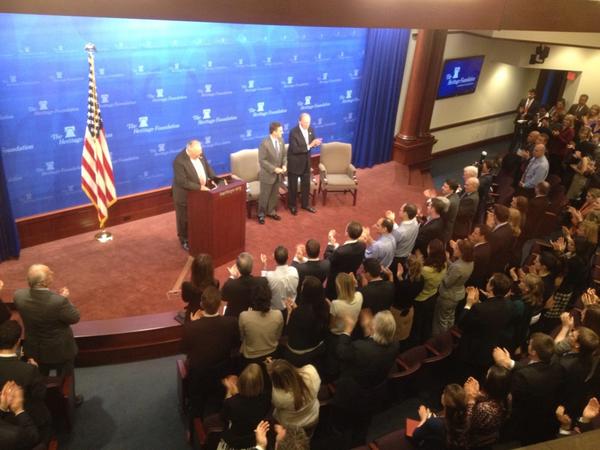 Very happy for you guys. RT @lachlan: Heritage staff gathering for an all-staff meeting. The mood is electric.

RT @ewerickson: Here’s my take on Jim DeMint and Heritage.Conservatives should be really excited by this.redstate.com/2012/12/06/two…

DeMint’s a step up & to the right for Heritage, better than recycling the old guard.

The move of @jimdemint to take over @heritage is simply awesome. Stale Beltway orthodoxies, prepare for affliction.

It’s been an honor to serve the people of South Carolina, now it’s time to pass the torch and take on a new role 1.usa.gov/TUxBWC

Twitchy will continue to monitor and bring you further developments.

Update: Sarah Palin and Sens. Rubio and Toomey send their congratulations and thanks.

We look forward to Jim DeMint’s new leadership at the Heritage Foundation, and we’re all grateful for his past leadership in the Senate.

Sad to lose @jimdemint in the #Senate. But excited he is staying involved in the cause with @heritage. #tcot #gop

Congratulations to @jimdemint. Your departure will be a huge loss for U.S. Senate & conservative movement.

The rights for TimScottforSenate.com were (privately) purchased today.

A great choice! RT @peterhambycnn DeMint has made it known in Columbia that he wants Tim Scott to be appointed to his seat, sources tell CNN

And Tim Scott weighs in.

I want to thank Senator DeMint for the tremendous work he has done on behalf of South Carolina and the nation. ow.ly/fSGBu