A Little Girl Cried For Days Over Her Lost Stuffed Animal. How She Found It Made Me Cry.

On Friday, a woman named Lauren Bishop Vranch found a small stuffed animal, lost and forlorn at Kings Cross Station. The little thing was completely threadbare and had obviously been some child’s close companion for years – and now he was all alone. Determined to help out a little boy or girl in need, Lauren picked up the stuffed animal (which she guessed was a teddy bear) and took to the Internet. She was determined to save it!

Her first, alerting the Internet of the bear’s predicament.

She tried to give the little guy to the employees at the station, but they advised her that the bear would probably end up very far from where he was lost.

Tried to hand #lostbear to train staff but was advised he’d be dropped off at Inverness, when his owner travelled York-Kings Cross.

So, Lauren took the little bear with her! He was in for quite a trip…

Little bear has found a cosy pub with a fire and a Christmas tree. Think he misses home tho. pic.twitter.com/CeNmpK5iaQ

All the while, she updated her Twitter account with pictures and status updates, using the hashtag #lostbear, hoping to find the owner. (And she also took him to see a show at Northern Stage Newcastle.)

She even took him backstage (lucky bear).

She even put the little guy up at a hotel (with her anyway).

Little bear has found a nice hotel to stay in. Tho the more I look at him, the more he looks like a dog. pic.twitter.com/69CstuhsBK

He was seeing the world.

But no matter how much fun Lauren was having with her new friend, she was determined to get him home.

Sad #lostbear Not out of the (metaphorical) woods yet. Someone must know him. pic.twitter.com/D0TrCdRKGv

The internet did its best to help aid Lauren in her search. 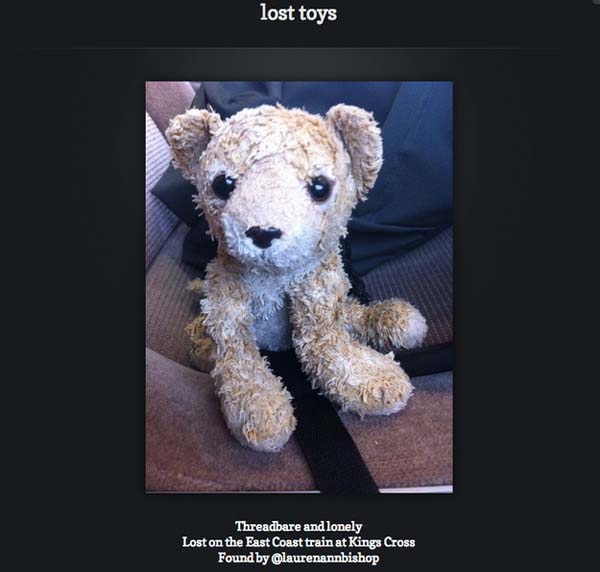 Unfortunately, when she got back to London, she was unable to go to the Lost Property department as it was closed on weekends. So, the two stayed in and watched television.

Then, something miraculous happened! The family that the little bear belonged to saw Lauren’s post on a Facebook page. A little girl named Phoebe lost the little (as it turns out) lion named Roar when she was on a family trip to London.

Well done, internet!! It looks like the owner of #lostbear has been found. Bear is actually a lion – oops! 🙂 Thanks everyone!!

And after another special trip to London… 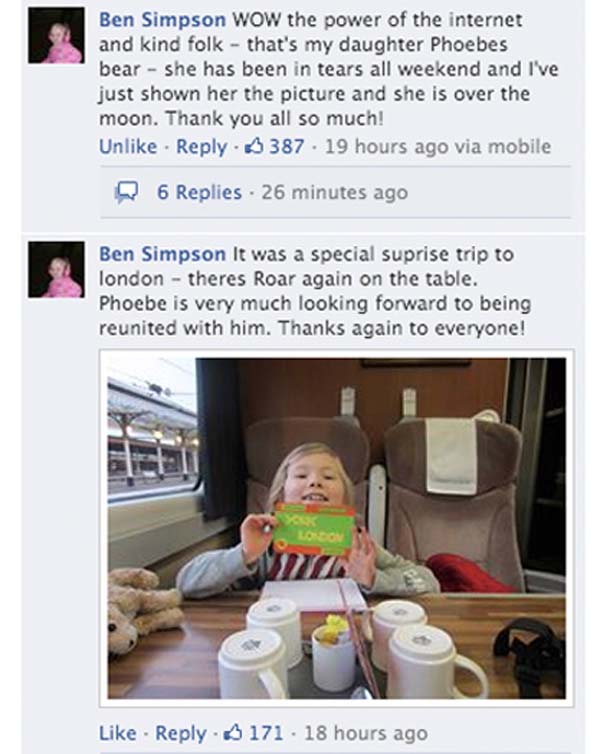 Phoebe and Roar were back together again!

Sometimes, the internet proves to be full of really awesome people.

I spoke to Phoebe’s dad this morning and Roar is now on his way to Yorkshire to be reunited. Thanks to everyone who RTed and shared.

Thank you, Lauren, because you just restored our faith in humanity!

Previous Post: Here’s Hilarious Proof That Cats Are Evil And Dogs Are Pushovers. I Laughed So Hard.
Next Post: Hey Pal, Watch Where You’re Going!