Man Plummets To His Death After Bizarre Parasailing Technique Backfires

Parasailing is a super fun activity many enjoy while on vacation, but if proper precautions aren’t taken, it can easily end in death.

Unfortunately for 71-year-old Roger John Hussey, an Australian businessman visiting Phuket, Thailand, last week, he became a tragic example of what happens when harnesses aren’t properly secured — and when the guide jumps on for a ride without any safety gear whatsoever.

Though Hussey was fitted with harnesses around his body beforehand, the straps around his bottom half didn’t appear to be connected to anything.

Pair that with the guide grabbing onto the ropes and taking off with him and it became an awful recipe for disaster. Though the man was clearly risking his life, it’s apparently a common stunt that parasail operators pull in Phuket.

When it comes to Thailand, safety measures aren’t always enforced, and some operators aren’t even certified. At least one of the two played a role in this incident, which led to Hussey falling out of his harness. 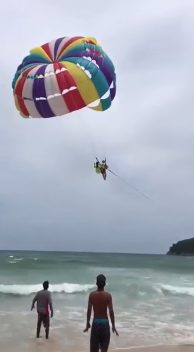